The symbols of the Republic of Angola are the Flag, the Insignia and National Anthem

The national flag consists of two colours in horizontal bands. The upper band is bright red and the lower one black and they represent:

Bright red – the blood shed by Angolans during colonial oppression, the national liberation struggle and the defence of the country. 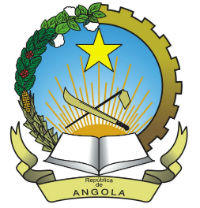 The insignia of the Republic of Angola is formed by a segment of a cog wheel and sheaves of maize, coffee and cotton, representing respectively the workers and industrial production, the peasants and agricultural production. At the foot of the design, an open book represents education and culture, and the rising sun represent the new country. In the centre is a machete and a hoe symbolising work and the start of the armed struggle. At the top a star symbolising international solidarity and progress. In the lower part of the emblem is a golden band with the inscription ‘Republic of Angola’.

O Fatherland, we shall never forget

The heroes of the Fourth of February.

O Fatherland, we salute your sons

Who died for our Independence.

We honour the past and our history

As by our work we build the New Man.

We honour the past and our history

As by our work we build the New Man.

Revolution through the power of the People!

One People, one Nation!

Let us raise our liberated voices

To the glory of the peoples of Africa.

We shall march, Angolan fighters,

In solidarity with oppressed peoples.

We shall fight proudly for Peace

Along with the progressive forces of the world.

We shall fight proudly for Peace

Along with the progressive forces of the world.

Com as forças progressistas do mundo.

Com as forças progressistas do mundo. 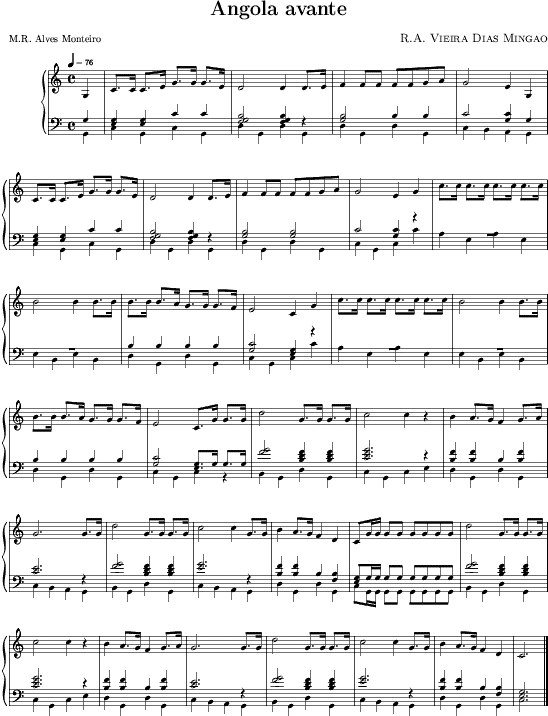 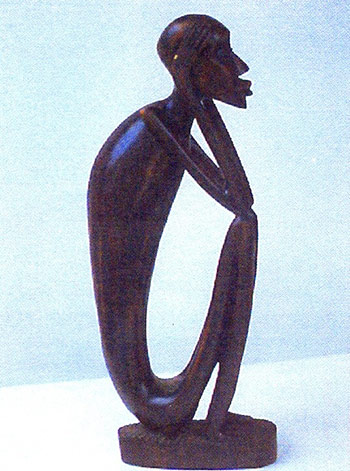 The piece of sculpture called “O Pensador” (The Thinker) is one of the most beautiful statutes of Tchokwe origin, representing today a reference of the culture concerning all Angolans, as it is a symbol of the national culture. It represents the figure of an elderly person that could be a man or a woman. Designed in a symmetric profile, with the face slightly bent down, it expresses an intentional subjectivism as, in Angola, the elderly represent wisdom and enjoy a privileged status. The elderly represent the wisdom, experience of long years and knowledge of the secrets of life.

It is said that “O Pensador” has the following origin: In northeastern Angola there is the divination basket, the “ngombo”, and the fortune teller uses small wood carved figures that will tell the fortune of the consulter. Curiously, this small figures came to inspire the famous national figure of “O Pensador”.

This image is today an Angola’s emblematic figure that is included in the filigree of the kwanza bank note, the national currency. It is considered as a native piece of art trustworthily Angolan. Alike any emblematic figure of a people – as it is the case of the “Zé Povinho” in Portugal, “John Bull” in England or the “Uncle Sam” in the United States – “O Pensador” has its origin in a “created” or “conventional” tradition.

The first figures of “O Pensador” were carved from the Dundo Museum workshop, late in the decade of 40 of the 20th century. In 1947, on an initiative by Diamang, the then Lunda Diamond Company, a museum of traditional art and archaeological and ethnographic collections was created in Dundo village. Officials of the company, mostly Belgians and Portuguese, hired local craftsmen and stimulated them into carving on wood or modelling on clay, figures that would be genuinely Angolan but, at the same time, whose forms likened an aesthetics that they found to be more conventional in the western sense.

Nowadays, one can buy a statute of “O Pensador” from galleries, shops and fairs of craft pieces in various dimensions and materials, as souvenirs of Angola. 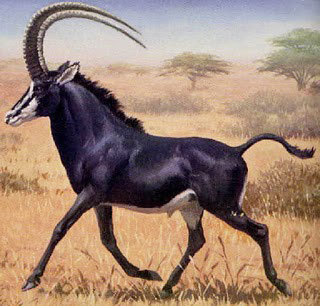 The Giant Sable Antelope (Hippotragus niger, var.) is the most beautiful African antelope. In addition to the beauty of its forms, it is further endeared by the fact of existing only in Angola and in very few numbers, as the species is classified as in serious danger of extinction (IUCN, 1996). Its hunting is strictly forbidden as a protection measure.

These so beautiful animals lived in small herds of six to twelve, often spotted about and inside open bushes, near water ponds and grasslands. But they were also often seen isolated or in couples.

The word Hippotragus derives from the combination of the Latinised Greek terms “hippo” (that means horse) and “tragus” (that means goat or antelope). Although not having any relation with a perissodactyle (of the horse family), this antelope has a long and hairy tail, an upright crest, long and sharp-pointed ears and a thick almost upright neck that resembles the silhouette of an equine.

A herd of giant sable antelopes, in the surroundings of the jungle they are often seen is one of the most beautiful sights one can admire in Angola. However, this is almost impossible these days, except on pictures. After 20 years without being spotted, the giant sable antelope was re-discovered in 2005, in Kuando Kubango.

In the past, the horns of the sable antelope were used as decorating ornament. Extraordinarily long and robust, they can grow as long as a metre, with each forming a semi-circle.

Currently, the Angola’s national team of football is known as “sable antelopes”.

Welwitschia is a kind of succulent plant, consisting of one single species, the famous Welwitschia mirabilis, only found in the desert to the south of Angola. This species was baptized after Dr. Friedrich Welwitsch, who contributed for this and other plants of Angola to become known. Due to its unique characteristics, including its slow growth, Welwitschia is considered an endangered species and has become a symbol of the national culture for its resistance and longevity.

It is a creeping plant, formed by a woody stem that does not grow long, an enormous and straightened root and two leaves only, that stem from the cotyledons of the seed. The leaves, in a wide strap-shaped form, grows continually throughout the entire life of the plant, as it is provided with basal meristems. With time, the leaves eventually grow to a length of two metres and goes in tatters in the tips. It is difficult to assess the age of these plants, but they are thought to live over 1000 years.

Welwitschia mirabilis is a dioecious species, that is, with separate males and female plants. Tradicionalmente, this species was classified as gymnospermic (like pines and alike plants), but it is now classified as gnetophyta, a branch of the green plants that produce seeds (spermatophyte).

Despite the climate it lives in, Welwitschia can absorb dew water through the leaves.

This species also has the physiological characteristic like those of the crassulaceaes (plant with flashy leaves or succulent, like the cactus): acid metabolism – during daylight, the leaves keep the tomata closed, to prevent perspiration, but at night they open, letting in the carbon dioxide needed for photosynthesis and store it, in the form of malic and isocitric acids in the vacuoles of its cells; during daylight, these acids let out CO2 and transform it into glucose, through reactions known as Calvin cycle.

The largest known Welwitschia, nicknamed “The Big Welwitschia”, stands 1.4 metres tall and is over 4 metres in diameter. 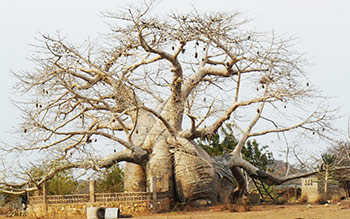 Large trunk tree native to the Angola’s Mayombe forest. This huge vegetal can grow as tall as 30 metres and has a capacity to store, in its giant trunk, up to 120,000 litres of water. For this reason, it is also called the “bottle tree”. The baobab is considered as sacred, inspiring poetries, rites and legends. According to an ancient African legend, for example, the soul of a man will live as long as the baoba, once his dead body is buried inside the tree. Curiously, this tree has a long life span – between 1000 and 6000 years. Only the sequoia and the Japanese cedar can eventually outlive the baobab. It is worth mentioning that this plant was largely publicized in the 20th century, on the book The Little Prince by French writer, Antoine de Saint-Éxupery.

Its scientific name is Adansonia digitata, but it is also known as African Baobab. The baobab has a thick trunk, eventually reaching nine metres in diameter.

Its trunk becomes narrower into a cone shape and presents swelling protuberances. The leaves shoot between July and January but can remain for the whole year when the tree remains humid. Normally, the baobab flowers overnight, between May and August. In the few hours of the blossoming, necter night consumers – particularly bats -, seek to secure the plant’s pollination.

Everything from baobab can be used to secure human survival. It is worth mentioning that the tree is also a precious source of medicines. Its leaves are rich in calcium, iron, proteins, lipids, and can also be used against diarrhoea, fevers and inflammations. A powder ground from its dry leaves has been used to fight anaemia, ricketiness, dysentery, rheumatism, asthma and is also used as a tonic.

Its fruit is called múcua. The shell of the fruit, in concave shape, is used by people as a bowl. The pulp and the fibre can be used to fight diarrhoea, dysentery, measles and chickenpox. The inside part of the fruit can be used to fight fever and digestive tube inflammation; its seeds are full of vegetable oil and can thereby be roasted and eaten. Once well cooked, the roots of the fresh baobab can be eaten, just as asparagus.