Angola is located on the South Atlantic Coast of West Africa between Namibia and the Republic of Congo. It also is bordered by the Democratic Republic of the Congo and Zambia to the east. The country is divided into an arid coastal strip stretching from Namibia to Luanda; a wet, interior highland; a dry Savana in the interior south and southeast; and rain forest in the north and in Cabinda. The Zambezi River and several tributaries of the Congo River have their sources in Angola. The coastal strip is tempered by the cool Benguela current, resulting in a climate similar to coastal Peru or Baja California. There is a short rainy season lasting from February to April. Summers are hot and dry, while winters are mild. The interior highlands have a mild climate with a rainy season from November through April followed by a cool dry season from May to October. Elevations generally range from 3,000 to 6,000 feet (900 to 1,800 m). The far north and Cabinda enjoy rain throughout much of the year.

The coast is for the most part flat, with occasional low cliffs and bluffs of red sandstone. There is but one deep inlet of the sea – Great Fish Bay (or Baía dos Tigres). Farther north are Port Alexander, Little Fish Bay and Lobito Bay, while shallower bays are numerous. Lobito Bay has water sufficient to allow large ships to unload close inshore. The coast plain extends inland for a distance varying from 30 to 100 miles (48 to 165 km). This region is in general sparsely watered and somewhat sterile. The approach to the great central plateau of Africa is marked by a series of irregular terraces. This intermediate mountain belt is covered with luxuriant vegetation. Water is fairly abundant, though in the dry season obtainable only by digging in the sandy beds of the rivers. The plateau has an altitude ranging from 4000 to 6000 ft (1,200 to 1,800 m). It consists of well-watered, wide, rolling plains, and low hills with scanty vegetation. In the east the tableland falls away to the basins of the Congo and Zambezi, to the south it merges into a barren sandy desert. 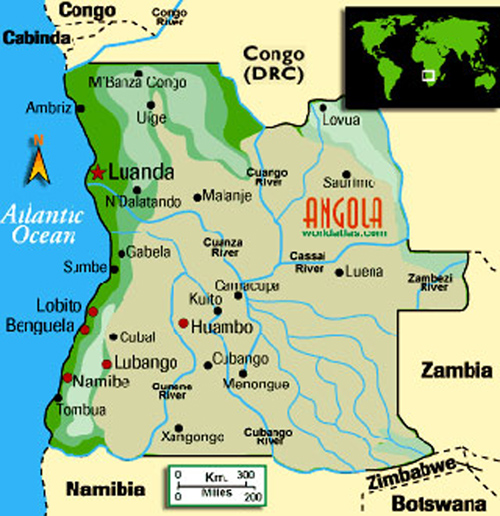 A large number of rivers make their way westward to the sea; they rise, mostly, in the mountain belt, and are unimportant, the only two of any size being the Kwanza and the Kunene, separately noticed. The mountain chains which form the edge of the plateau, or diversify its surface, run generally parallel to the coast, as Tala Mugongo (4400 ft., 1350 m), Chella and Vissecua (5250 ft. to 6500 ft. or 1500 to 2000 m). In the district of Benguela are the highest points of the province, viz. Loviti (7780 ft., 2370 m), in 12° 5’ S., and Mt. Elonga (7550 ft., 2300 m). South of the Kwanza is the volcanic mountain Caculo-Cabaza (3300 ft., 1000 m). From the tableland the Kwango and many other streams flow north to join the Kasai River (one of the largest affluents of the Congo), which in its upper course forms for fully 300 mi (490 km). the boundary between Angola and the Congo State. In the south-east part of the province the rivers belong either to the Zambezi system, or, like the Okavango, drain to Lake Ngami.

The rock formations of Angola are met with in three distinct regions: the littoral zone, the median zone formed by a series of hills more or less parallel with the coast, and the central plateau.
The central plateau consists of ancient crystalline rocks with granites overlain by unfossiliferous sandstones and conglomerates of Paleozoic age. The outcrops are largely hidden under laterite. The median zone is composed largely of crystalline rocks with granites and some Paleozoic unfossiliferous rocks. The littoral zone contains the only fossiliferous strata. These are of Tertiary and Cretaceous ages, the latter rocks resting on reddish sandstone of older date. The Cretaceous rocks of the Dombe Grande region (near Benguela) are of Albian age and belong to the Acanthoceras mamillari zone. The beds containing Schloenbachia inflata are referable to the Gault. Rocks of Tertiary age are met with at Dombe Grande, Mossamedes and near Luanda. The sandstones with gypsum, copper and sulfur of Dombe are doubtfully considered to be of Triassic age. Recent eruptive rocks, mainly basalts, form a line of hills almost bare of vegetation between Benguela and Mossamedes. Nepheline basalts and liparites occur at Dombe Grande. The presence of gum copal in considerable quantities in the superficial rocks is characteristic of certain regions.

Southern Africa, bordering the South Atlantic Ocean, between Namibia and Democratic Republic of the Congo

Like the rest of tropical Africa, Angola experiences distinct, alternating rainy and dry seasons. It is semiarid in South and along coast to Luanda; North has cool, dry season (May to October) and hot, rainy season (November to April). In the interior, above 3300 ft. (1000 m), the temperature and rainfall decrease. The plateau climate is healthy and invigorating. The mean annual temperature at São Salvador do Congo is 22.2° C (72.5° F); at Luanda, 23.3° C (74.3° F); and at Caconda, 19.5° C (67.2° F). The climate is greatly influenced by the prevailing winds, which arc W., S.W. and S.S.W. Two seasons are distinguished – the cool, from June to September; and the rainy, from October to May. The heaviest rainfall occurs in April, and is accompanied by violent storms.

Angola has three principal natural regions: the coastal lowland, characterized by low plains and terraces; hills and mountains, rising inland from the coast into a great escarpment; and an area of high plains, called the high plateau (planalto), which extends eastward from the escarpment. The highest point in Angola is Morro de Moco, at 2,620 m.

The coastal lowland rises from the sea in a series of low terraces. This region varies in width from about 25 kilometers near Benguela to more than 150 kilometers in the Cuanza River Valley just south of Angola’s capital, Luanda, and is markedly different from Angola’s highland mass. The Atlantic Ocean’s cold, northward flowing Benguela Current substantially reduces precipitation along the coast, making the region relatively arid or nearly so south of Benguela (where it forms the northern extension of the Namib Desert), and quite dry even in its northern reaches. Even where, as around Luanda, the average annual rainfall may be as much as fifty centimeters, it is not uncommon for the rains to fail. Given this pattern of precipitation, the far south is marked by sand dunes, which give way to dry scrub along the middle coast. Portions of the northern coastal plain are covered by thick brush.

The belt of hills and mountains parallels the coast at distances ranging from 20 kilometers to 100 kilometers inland. The Cuanza River divides the zone into two parts. The northern part rises gradually from the coastal zone to an average elevation of 500 meters, with crests as high as 1,000 meters to 1,800 meters. South of the Cuanza River, the hills rise sharply from the coastal lowlands and form a high escarpment, extending from a point east of Luanda and running south through Namibia. The escarpment reaches 2,400 meters at its highest point, southeast of the town of Sumbe, and is steepest in the far south in the Serra da Chela mountain range.

The high plateau lies to the east of the hills and mountains and dominates Angola’s terrain. The surface of the plateau is typically flat or rolling, but parts of the Benguela Plateau and the Humpata Highland area of the Huíla Plateau in the south reach heights of 2,500 meters and more. The Malanje Plateau to the north rarely exceeds 1,000 meters in height. The Benguela Plateau and the coastal area in the immediate environs of Benguela and Lobito, the Bié Plateau, the Malanje Plateau, and a small section of the Huíla Plateau near the town of Lubango have long been among the most densely settled areas in Angola.

Most of the country’s many rivers originate in central Angola, but their patterns of flow are diverse and their ultimate outlets varied. A number of rivers flow in a more or less westerly course to the Atlantic Ocean, providing water for irrigation in the dry coastal strip and the potential for hydroelectric power, only some of which had been realized by 1988. Two of Angola’s most important rivers, the Cuanza and the Cunene, take a more indirect route to the Atlantic, the Cuanza flowing north and the Cunene flowing south before turning west. The Cuanza is the only river wholly within Angola that is navigable—for nearly 200 kilometers from its mouth- -by boats of commercially or militarily significant size. The Congo River, whose mouth and western end form a small portion of Angola’s northern border with Zaire, is also navigable.

North of the Lunda Divide a number of important tributaries of the Congo River flow north to join it, draining Angola’s northeast quadrant. South of the divide some rivers flow into the Zambezi River and thence to the Indian Ocean, others to the Okavango River (as the Cubango River is called along the border with Namibia and in Botswana) and thence to the Okavango Swamp in Botswana. The tributaries of the Cubango River and several of the southern rivers flowing to the Atlantic are seasonal, completely dry much of the year.

Over use of pastures and subsequent soil erosion attributable to population pressures; desertification; deforestation of tropical rain forest, in response to both international demand for tropical timber and to domestic use as fuel, resulting in loss of biodiversity; soil erosion contributing to water pollution and silting of rivers and dams; inadequate supplies of potable water.

Both flora and fauna are those characteristic of the greater part of tropical Africa. As far south as Benguela the coast region is rich in oil palms and mangroves. In the Northern part of the province are dense forests. In the South towards the Kunene are regions of dense thorn scrub. Rubber vines and trees are abundant, but in some districts their number has been considerably reduced by the primitive methods adopted by native collectors of rubber. The species most common are various root rubbers, notably the Carpodinus chylorrhiza. This species and other varieties of carpodinus are very widely distributed. Landolphias are also found. The coffee, cotton and Guinea pepper plants are indigenous, and the tobacco plant flourishes in several districts. Among the trees are several which yield excellent timber, such as the tacula (Pterocarpus tinctorius), which grows to an immense size, its wood being blood-red in colour, and the Angola mahogany. The bark of the musuemba (Albizzia coriaria) is largely used in the tanning of leather. The mulundo bears a fruit about the size of a cricket ball covered with a hard green shell and containing scarlet pips like a pomegranate. The fauna includes the lion, leopard, cheetah, elephant, giraffe, rhinoceros, hippopotamus, buffalo, zebra, kudu and many other kinds of antelope, wildpig, ostrich and crocodile. Among fish are the barbel, bream and African yellow fish. Geography – note: the province of Cabinda is an exclave, separated from the rest of the country by the Democratic Republic of the Congo.

This is a list of the extreme points of Angola, the points that are farther north, south, east or west than any other location.